Mimic is a platform for DeFi automation. By deploying custom Smart Vaults, it can transform centralized manual work into trustless automated actions.

Recently, members of the ParaSwap DAO have proposed to implement a Fee Redistribution mechanism as part of their PSP 2.0 proposal, in which assets accrued as fees would be converted to a native chain token (eg. ETH), and then distributed between stakers and the DAO treasury.

In the current version of the proposal, there is no automated solution for this mechanism. We propose that Mimic Smart Vaults could be used to automatically convert accrued assets into the desired token. Mimic Smart Vault could be deployed in each different layer ParaSwap is in to automate how ParaSwap collects, converts and distributes its protocol fees.

Mimic is a platform that allows you to deploy tailored infrastructure to automate (and/or delegate) access to DeFi, in a secure and 100% non-custodial way. Mimic is especially suitable to replace and speed up manual and centralized tasks while tracking and monitoring every detail. This is achieved through our innovative Smart Vaults concept: an automated and trustless solution that can be customized to suit your operation needs.

Deploying a Smart Vault is simple. We only need to figure out the best configuration that suits your needs and customize one for you. Moreover, Mimic provides you with lots of multi-layer flexibility, it can be easily scaled up by deploying and connecting additional Smart Vaults. 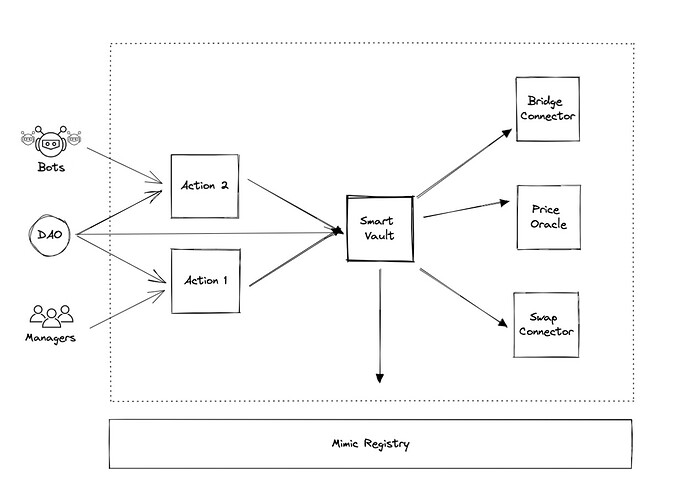 Our team members have a large experience in blockchain and especially in DeFi protocols. We have previously worked on many well-known projects like Aave, Balancer, Open Zeppelin, Aragon, POAP, and The Graph.

Assuming that the ParaSwap DAO decides to implement the fee redistribution system proposed in PSP 2.0, We propose to provide ParaSwap DAO with a solution to automate how it collects and distributes its protocol fees to assist with the implementation of this system. To accomplish this, Mimic will deploy customized Smart Vaults owned by ParaSwap DAO, one on each layer.

All Smart Vaults will only be allowed to collect earned fees when each token reaches a pre-determined value in USDC. Collected PSP and wrapped native chain token will not be converted. Collected chain token will be wrapped All other tokens will be converted to wrapped native chain token. Finally, once a month, those collected tokens will be automatically withdrawn from Mainnet Smart Vault to a ParaSwap smart contract to distribute back to their token holders.

Also, it is essential to mention that at all times, the DAO has full ownership and control of all Smart Vault’s assets. This means that, for example, at any moment, it can remove permissions to execute an action or withdraw any asset by itself.

There will be seven Smart Vaults - one per layer: Ethereum Mainnet, Binance Smart Chain, Avalanche, Polygon, Fantom, Arbitrum, and Optimism. All Smart Vaults will have a single owner who has full control over them at all times.

Each Smart Vault will be configured with a series of predefined actions. Some of which will be automatically executed by Mimic network of bots and others manually by an authorized manager that ParaSwap DAO designates. Those actions are:

Note that all this behavior will be enforced by smart contracts code. Actions won’t be allowed to perform any other logic (More information here: https://docs.mimic.fi/general/how-it-works)

Following the current implementation of PSP 2.0, all smart vaults could initially gather and swap into WETH, and the assets could be bridged to Mainnet for redistribution. If the DAO proposes to implement staking on any of these chains in the future, the parameters of these vaults could also be changed if needed.

Mimic offers a reporting site where users can follow all their Smart Vaults activity. Mimic also supports subscribing to a notifications service that can be easily integrated with some chat rooms like Discord. Additionally, users can subscribe to be notified with periodic reports that will be emitted by Mimic automatically.

Mimic will be in charge of monitoring the Smart Vaults daily, making sure the reporting tools are kept up-to-date accordingly. Additionally, Mimic will use its own bots infrastructure to execute the automated actions when needed.

If a critical report is received, Mimic will act immediately to assess its severity and act accordingly. In case Smart Vaults assets are at risk, the Mimic team will get in touch with the trusted committee to pause the Smart Vaults operations until it can be migrated to a new implementation with the corresponding fixes.

Mimic will charge a 2% fee for the assets processed through the Smart Vaults with a 5K USD monthly cap. Fees will start at 0% and increase by 0.5% every three months to reach 2% after a year of execution.

The first six epochs of the Mimic implementation will be considered a pilot period to assess the effectiveness of the solutions implemented. After that, fees will increase by 0.5% every three months to reach 2% (always with a monthly cap).

As mentioned before, ParaSwap DAO will fully control its Smart Vaults and the funds deposited into them. This means ParaSwap DAO is allowed to exit at any point in time. Neither Mimic nor anyone else, unless it was previously allowed by the ParaSwap DAO, will never be in control of those funds.

Initially, Mimic Smart Contracts have been all privately audited. They were recently audited by Verilog and no critical issues were found. Currently, they are being audited by Certora. More information and full reports here: https://docs.mimic.fi/miscellaneous/security

Once the final details of the ParaSwap Smart Vaults are finalized, the Mimic team will take full responsibility for setting up the required automated actions. Mimic already counts with infrastructure to deploy and test Smart Vaults that can be applied for this use case.

Assuming the proposed investment strategies and automated actions are accepted by ParaSwap DAO, setting seven Smart Vaults for it shouldn’t take longer than a month. After that, we will schedule an audit process just for the configuration before the deployment which shouldn’t take more than one week.

This idea is good but the price is to expensive.
If your vaults are already effective, every new contract is benefit.
So 2% is very very huge for me and you have to explain how you define your price?

Moreover, PSP collect correctly the fees… So we just need a solution to distribute.

Can you offer this solution and reduce your price?

What is your guarantees if your vaults are compromise and all the reserve hacked?

Hey @stikers! We collect fees for running the Mimic network of bots, monitoring, provide support, updates if needed or changes if requested. At any time the ParaSwap DAO can decide to stop using its Smart Vaults. Even after one week. Remember that we do not charge for developing, configuring or deploying Smart Vaults. It is also important to mention that there is a cap on the fee, the max that we can charge monthly is 5k USD and the first three months we do not charge anything. So if the solution does not add value to ParaSwap DAO, it can stop using it on those first 3 months and no charges will be applied.

PSP collects fees in different tokens, and they need to swap and bridge them to distribute back to sharing the fees with this PSP 2.0 proposal. It is not the collection of fees that is missing, but the swapping and bridging. That is what Mimic automates with bots, actions and thresholds/slippage limits. Otherwise, it has to be done manually, which is not a decentralized process. Imagine swapping and bridging more than 6500 tokens!

Our Smart Vaults has been audited twice and they are under a third audit by Certora. We constantly monitor every activity and act immediately if something comes up. There is an emergency button that stops all activities that ParaSwap DAO can execute. Remember that at all times ParaSwap DAO is the only owner of the Smart Vault, and it has full control over it. We also provide a UI so the DAO community can follow what is happening and configure alerts for discord.

Hope I answered all your questions!

This idea is great but its expensive.

So 2% is huge can you explain how you justify the price?

We just need a solution to distribute.

Can you offer this solution and is a price reduction possible?

Also who will certify you vaults? This is highly important for trust to be established.

2% of all cashflows seems VERY VERY high and reduces the value of the PSP token in a serious way if doing anything like a DCF valuation model. It is my understanding that this is a lot of overkill. Also concerned with vendor lock-in as once you pick a solution and it works, it becomes harder to migrate off. This would need to be negotiated down, I would vote NO until this is at 0.5% MAX.

The fee structure is with a max cap, and it’s progressive: starting with three month period to test, fees will begin at 0% and increase by 0.5% every three months to reach 2% after a year of execution.

We propose to match our pilot period with the same time as PSP 2.0: The first six epochs of the implementation of the system will be considered a pilot period to assess the effectiveness of the solutions implemented.

Again, the fee is with a cap. So until reached, the cost of this solution is under USD 5k. With the update on the pilot period, the fee will get this number after 13 months. Before that, mimic will cover the cost of the development, setup, initial deployment of all the Smart Vault in different chains, maintenance & monitoring, and the infrastructure of the mimic-bot network.

As mentioned, ParaSwap DAO will entirely control the Smart Vaults and the funds deposited. This means ParaSwap DAO is allowed to exit at any point in time. Neither Mimic nor anyone else will never be in control of those funds.

Mimic Smart Contracts have all been privately audited. Verilog recently audited them, and no critical issues were found. Now, there is an ongoing audit by Certora. More information and complete reports here: Mimic Security

Last: with this pilot period of 6 months, mimic will not get any fee from the actual and past treasury of the ParaSwap DAO. We will help to make it work the PSP 2.0 sharing fee feature for free during the first six epochs.