As part of the PSP 2.0 token discussions, one of the major implementations is the reforming of the current staking system towards a more efficient and practical system.

In this proposal, we suggest a movement away from a single-sided staking system and towards a vote-escrowed LP token composed of 80% PSP and 20% ETH, similar to the safety module. Additionally, we explore the potential emission savings that this system would give, as well as explore how other tokens have performed following this transition.

Balancer Pools contain two or more tokens that traders can swap between. Liquidity Providers put their tokens in the pools in order to collect swap fees. Balancer’s fully flexible design space opens the aperture of possibilities for all types of liquidity providers and their respective considerations. 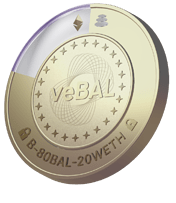 veBAL (vote-escrowed BAL) is a locked 80/20 BPT (Balancer Pool Token) composed of 80% BAL / 20% WETH. veBAL has a max. lock time of 1 year and can be used to direct BAL Liquidity Mining incentives on the Balancer Platform, vote on governance, and receive a portion of all protocol fees that Balancer produces.

ParaSwap has already got a Balancer-based pool through its safety module. With this proposal, we would simply convert all of the PSP that is currently only being used to single-side staking into a productive asset in this liquidity pool.

Shift voting rights and incentives to a vePSP model utilizing a Balancer 80/20 Pool as the lock token. This would not only establish consistent, long term liquidity for the PSP token but it could also save upwards of ~6mill PSP tokens a year by utilizing an 80/20 Pool Token as the mechanism to participate in PSP governance. In addition to this the downside effects of ve80/20 PSP are significantly minimized. The maximum total downard sell pressure on the PSP token would still be less than 45% of PSP’s daily trading volume, which could be easily arb’ed out and is still extremely unlikely.

The 80/20 Pool Token would also be available on multiple chains due to Balancer’s Multichain nature, so it is available to scale with the ParaSwap protocol as both expand to new chains. Further gauge mechanisms could be developed from here (incentivizing specific PSP pools, chains, etc.) however they are completely optional.

In spite of the idea that users are generally resistant to locking an additional 20% of another asset into an LP, data shows that ~75% of veBAL stakers locked both sides of the LP as opposed to single side locking and creating downside sell pressure for the native governance token.

Several Convex Style platforms have already launched on top of the veBAL platform - Those include Aura, Stake DAO and Tetu. The 0xMaki-led Aura is currently in the lead with ~1.9M veBAL ($31M) locked, with the other protocols slated to launch in the coming months.

Protocols or Users looking to direct incentives to their pools can also bribe vlAURA and veBAL holders to vote for their pool on Hidden Hand. Current ROI on Hidden Hand is very lucrative for DAO’s with Protocol Owned Liquidity. As of writing this document, the average protocol returned $2.80-$5.80 of Emissions per $1 of bribe money spent.

Emissions are sourced from the PSP/ETH Safety Module, ve80/20 assumes 2% of emissions are used to sustain as shown by the Balancer 80/20 Pool

The above table highlights the total cost savings ParaSwap could see by utilizing a ve80/20 model. This $116,963.00 in savings could be used to further the ParaSwap Protocol in ways outside of just sustaining liquidity - such as bounties or hackathons to help further the protocol itself.

Liquidity is sourced from all pools listed on the ParaSwap “Farms” page. Projected liquidity assumes an average veTOKEN lock rate of ~40%

The above table outlines the average single side lock % for veBAL holders (this is the average % of veBAL that was single asset locked as either BAL or ETH, resulting in a sale of either asset to make the LP whole). Over the course of the 8.5 mos of tracking 80/20 BAL/ETH LPs nearly 75% of all LPers chose to lock both sides of the asset, while only 25% chose to lock a single asset in their LP.

The table also outlines what the total max “sell off” of PSP could be if the target lock % (30%) was done in a single day. The total max sell off could be a total of ~42% of the Average Daily trading volume for the PSP token. This should easily be arbitraged out if it were to occur, however unlikely. Most veTOKEN’s take a significant amount of time to get to peak efficiency, even veCRV did not reach its current ~55% lock ratio until nearly 1.5 years in. So any sort of selling pressure on PSP should be extremely minimal when utilizing a ve80/20 model.

TLDR; ve80/20 PSP creates long term, sustainable liquidity at little to no cost to the DAO (allowing funds that traditionally would go towards Liquidity Mining to then be used to further the ParaSwap protocol) while preserving upside potential for users and limiting any sort of downside sell pressure on the token by locking the 80/20 LP. Other potential benefits include BAL emissions for users (+ another source of revenue for ve80/20 lockers via BAL gauges) and any sort of accrued swap fees.

Credit to Curtis and the biz dev team at Orb for a well written and thorough proposal. I’m a contributor at Balancer DAO - just wanted to chime in with my support. One key flaw in veCRV is that it creates a need to perpetually spend incentives to ensure sufficient on-chain CRV liquidity. Locking an 80/20 BPT solves this problem completely plus opens up another revenue stream for lockers (swap fees + BAL rewards potentially). I expect we’ll see many more ve systems locking 80/20 BPT’s as this dynamic becomes better understood by the market.

such a good proposal …thanx curtis…i have one question and one regard
did u consider sell pressure from cex’s? maybe im wrong but i think in this proposal all sell pressure count from decentral sources(sorry i’m noob in this regards)
…
for future lping i only choose psp/eth and really disagree with bal/psp or any low cap tokens…
best wishes

Hey @cryptologycate thanks for reading the proposal first off and secondly thank you for the question!

Yes that’s trading volume across all sources according to CoinGecko, IntoTheBlock and CoinMarletCap. They were all a bit different over the last thirty days so I just took the average Daily Trading Volume across all platforms.

Fully agree PSP should be paired against ETH or some other blue chip asset!

Jeremy from Balancer/Orb Collective here-- I’d love to see Balancer Protocol as the primary source of PSP liquidity and for the Paraswap DAO to maximize the benefits it receives from utilizing the 80/20 Balancer pool design.