I’d like to push forward the idea of a dynamic gas refund rate, indeed if you have 65k PSP then you could get 66% reimbursement, and 130k you would get 73%, that would incentivize stakers to hold and compound rather than just selling because next tier could be too far away. This calculation is based on ( LOG_10(PSP_Balance) - 2.2 ) * 0.25 with min 0 and maximum 1. 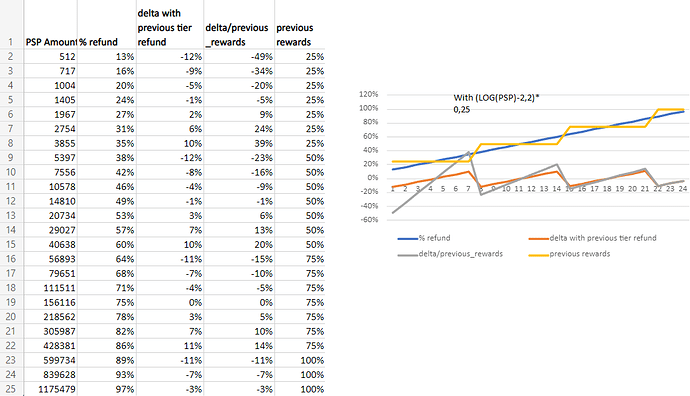 So this would incentivize to get more discounts by staking the earned rewards.

Great to see this. I think not topping at 100% will create considerable savings for the protocol and allow this incentive to run for longer and benefit more people. (Also a 100% refund is much likelier to get abused)

I really enjoy this suggestion, thank you for providing the data and graphs! Encouraging people to put their PSP back into staking for even a bit more benefits is always a good idea.

Just to build upon this idea, do you think we would need to adjust the existing levels to make this system more encouraging, or does it work with the current 500 to 500k scale? Also, pinging @sebastien-S3B , one of the gas refund masterminds to hear his thoughts about this!

Any news around this idea?

I’m still pretty convinced this will decrease PSP dumping to try reaching higher refunds rates, and will make 100% refund a bit more difficult to achieve (like previous thresholds), also resolving in less inflation overall.
Another advantage in my opinion, is that currently 500PSP is very little to get 25% refund, so we could discuss to raise a bit starting point for the refund program to something around 1000 or 2000PSP or higher (in the previous simulation 25% is reached at 1400PSP).

This would still be a really nice compensation system, though preserving the value for long term holders.

Would love to read your thoughts on this, and create a proposal to incorporate in PSP2.0.